Still practicing the tightrope. Some days I think I’m getting better.

My work has taken the shape of photographing South Provo. I am caught up, enthralled, or as K— puts it, obsessed. The shapes and textures here move my heart, give me a longing for the story beneath each layer. I get to know people, residents both past and present. I see their hopes and the dreams gone by. One wouldn’t likely find this place as rich and decadent as I do, but I don’t conjure from midair. And I mourn the passing of stories I can only just puzzle together.

I am in love with the south end of town. I want to see it preserved and cherished. I want to see improvements in the lives of the people without gentrification. My neighbors should not have to leave their homes for aesthetic upkeep. Maintenance should not require the influx of wealthier tenants. I don’t know who owns the land beneath me. I don’t know if that ownership goes to the core of the earth. But the bodies buried across the street are each allocated six feet from lawn to slumber. I would count the stones if I had a cool day to wander the cemetery grounds. It wasn’t five years ago it opened its hoary maw and swallowed and fenced another two acres. Accommodations for future guests. Even though the earth does not expand.
I love this place although I foresee leaving it. My final nestling is just years from the edge of our abode, before he springboards into a world so far from his imagination that he’s only seen it in movies. Isn’t it the same for all of us? I already miss what is not yet gone. And where to next? Where to?
“Might I,” quavered Mary, “might I have a bit of earth?” 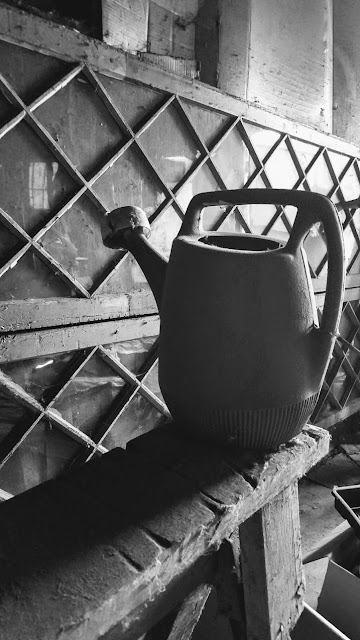 Posted by Bonnie Shiffler-Olsen at 4:02 PM

"We have to continually be jumping off cliffs and developing our wings on the way down."
Kurt Vonnegut